”To find and not let go” Ukrainian and Georgian modernism 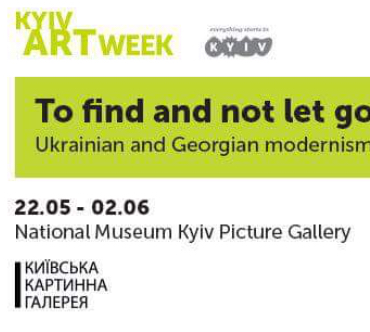 I am very happy to be taking part in the exhibition ”To find and not let go” – Ukranian and Georgian modernism, at National museum Kiev Pictures Gallery.

In this project, three dynasties of artists from Ukraine and Georgia are united. The national avant-garde of Ukraine and Georgia was not destined to fulfill itself: after the short-lived flowering of original art in 1917-1918, both countries became part of the empire again. In the early 1930s, the USSR forcibly introduced a new method of «socialist realism» and established special institutions of censorship and supervision of artists. The Soviet Union did not give artists the opportunity to explore a person, to look for secret or imperfect, forcing them to construct an ideal image of the modern hero, using several maintaining narratives. Every controversial, subconscious, irrational, traumatic personality seemed to be non-existent. From many faces of human personality only those had the right to exist, that were approved by soviet regime. Representatives of authority could only be majestic and fair, and ordinary people could look only healthy and happy. In the 1960s, during the Khrushchev Thaw, art received a little more freedom for a while (that breath of freedom artists saved even after the subsequent repressions). Some artists have turned to the study of the origins of the native culture of their countries, using elements of folk art, while others were interested in the art of modernism. The ideas of modernism and its stylistic movements allowed the generation of soviet artists in 1960s and 1970s to find expression for reflections about their contemporaries and about the person in its entirety. All participants worked not only with state orders, but also created artworks that were not meant to be on public display.
These intimate pieces, created in artists’ duos or small unions, were seen and understood only by close friends. Represented in this project artists worked separately, not being acquainted with each other. But the organization of their personal worlds was very similar. This is an intellectual protest against the Soviet world order, the search for comfort in a small circle of people of kindred spirit, inspiration in the literature and art of early twentieth century. Appealing to modernism and avant-garde, the artists did not want to integrate the man and humanity into the framework of ideology anymore. The ideas of the early avant-garde with its aspirations to organize and subordinate society were not actual interesting for soviet generation. The main attraction was the research in the field of individual, spiritual or transcendental. Ukrainian and Georgian artists studied the possibilities of alternative, quiet freedom, which the person acquires by intellectual research and that is knowledge-based. They were inspired by Pablo Picasso with his desire to designate all the invisible sides of the object, felled in love with the ideas of autonomy of human spirit exposed by Pete Mondrian in his geometric abstraction, admired abstract sculptural forms and elements of Constantine Brancusi, expressionist sculptures of Ernst Barlach and Alberto Giacometti.
Eliminated from the possibility of dialogue with European and American artists, Volodymyr Melnytchenko, Ada Rybachuk, Vladyslav Mamsikov, Iryna Gerasymova, Revaz Tchantouria, Leri Chanturia, Carlo Grigolia and Beso Grigolia created works that are in the context of world art trends. Arsenal of their stylistic techniques allows you to find out about the internal searches of people who lived in the country, full of irreconcilable contradictions.

22 May “To find and not let go” Ukranian and Georgian modernism, Kiev Art Week